2062 St. John's Bluff Rd South
Jacksonville, FL 32246-6713
(904) 722-9061
Send a message
jacksonvillejapaneseautospecialist.com/
About
Japanese Auto Specialist is equipped to handle almost any problem you have with a Japanese car or truck. We stay abreast of industry changes and have the institutional knowledge to repair early model vehicles. 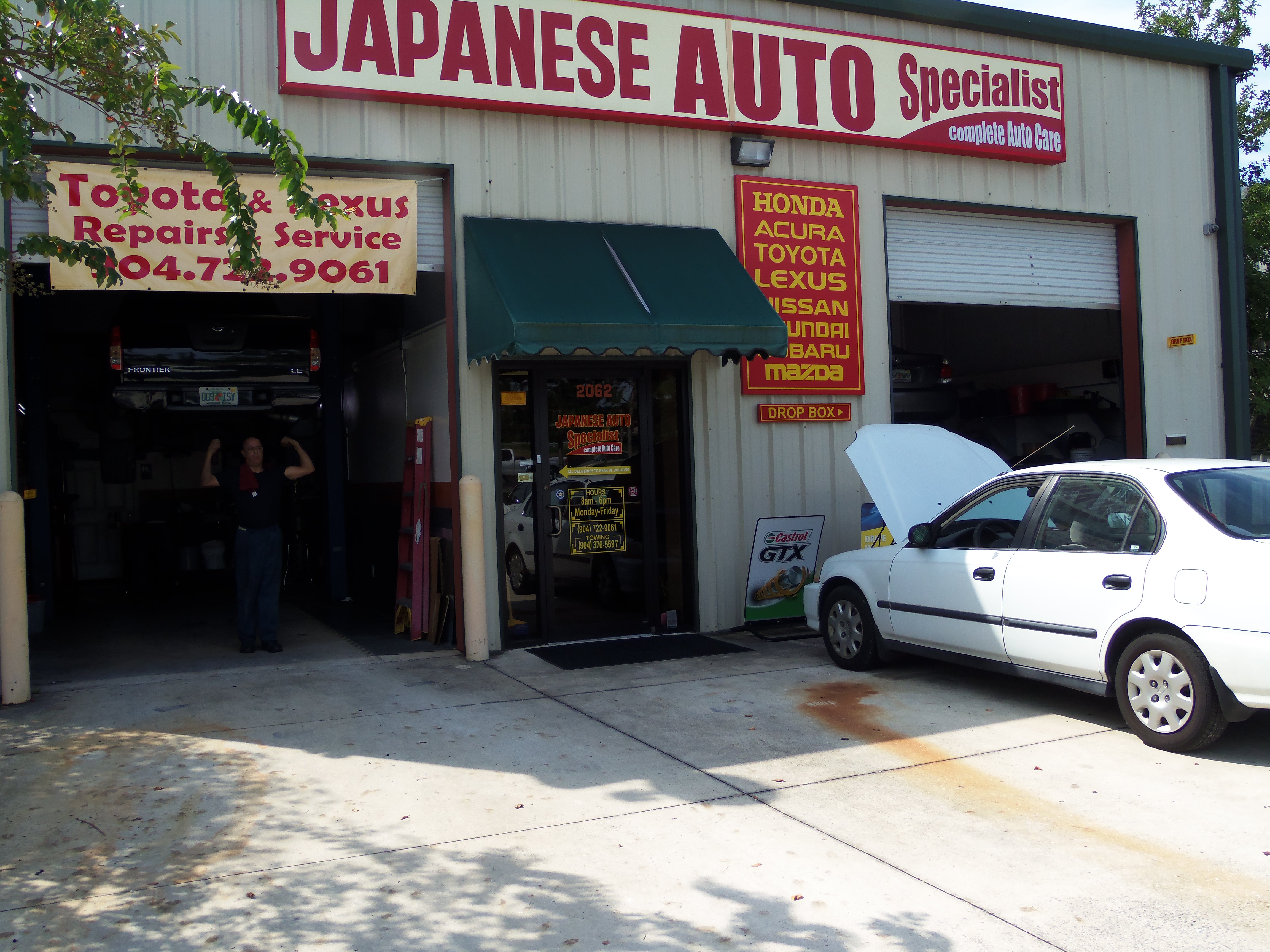 02/18/2019
Horrible experience
I took my car in to get checked out and to get a quote on repairs, after paying $56 for the diagnostic I picked up my Car Friday evening and when I did the VSA lights, and check engine lights were on and the car would start stalling out when it reached 3K RPM. I called 1st thing Monday to let them know of the issue and they said to bring it back in which I did that afternoon after work. They looked at it and said that they would have to charge another fee to be able to figure out why the car would stall at 3K RPM. I left and took my car to the Honda dealership where they looked at it and discovered the MAP sensor was unplugged within 5 minutes. Once plugged back in the VSA and check engine light went off and the car drove fine. I will not be going back and will be letting everyone I know about my experience, because they either did it on purpose to screw me over or they are incompetent.
SP

04/20/2018
WATCH OUT!!! YOU HAVE BEEN WARNED !!
First, Dave tells me that I need a brake job, "right away" . After several attempts asking David to give me an estimate, which for some reason he never supplied. I decided to let him do the brake job. In the meantime, I did call the Toyota dealer for a ball park idea what I would be charged, around $230.00. When Dave said that the job was done, he charged me over $400.00. Almost double what the dealer's shop quoted. When I asked him why, he gave me some double talk about the dealer running a scam to entice new customers, right... Dave is very difficult to get in touch with, never returns calls and as I said, will not supply an estimate when requested. I won't be using this mechanic again.
David G. from Japanese Auto Specialist responded on 04/25/2018

Stan I have a time dated copy of the estimate provided to you and it is available reading or any one reading this to view. Dated 02/05/2018 and can prove your received it. Your vehicle arrived and your work was approved and performed 3 days later. I am not seeing any complaint from you on the performance of the brake work. I am reasonably sure all but the most inexperienced consumer knows better than to believe the bait and switch tactics from a local car dealer. the difference is your were told the truth by us up front and had  the work performed. I am at my shop 10 to 14 hours every day Monday through Friday over 200 customer come throug my doors every month you can reach me anytime you need to by Phone, Text, and email. Stan there are the people who stand in front of the forest and can only see the trees. I am absolutely you qualify for that statement. Stan I will continue to take care of those that can see the forest. With 45 years as Toyota tech there is know doubt in the mind of my intelligent customers minds my brake repair philosophy is sound. Stan we have a .002% re service rate on your brake repairs. given the fact the average deductible is up to almost $1000 today after an accident $400 dollars worth of brakes is a wise choice is my world. I only pray it is not you behind me when you need to panic stop after you have your next brake repair performed. Keep looking at the trees Stan Picus

08/15/2016
Honest and Reliable Service
David and team are above top notch with service and work ethic. I wouldn't take my vehicles anywhere else.
RH

01/17/2021
Work done on my 2003 Tacoma
Im a repeat customer. My son has a 2001 4 Runner that has been to David’s shop for AC work and an issue with the rear axle bearings. 4 Runner works great! This work was done about 2 years ago.
My 2003 Tacoma just hit 300,000 miles in October of 2020 and due for the water pump and timing belt replacement. I usually go to a Toyota dealer for this work but just found out about David’s shop a few years ago and decided to let him do the work this time along with replacing the front wheel bearings and a few other issues I had with the truck. David and his crew are very thorough and being mechanically inclined myself I know David isn’t just making up work that needs done. If he recommends it then it’s needed. I plan on keeping this Tacoma so I want it reliable with no issues as it’s been since I bought it in 2006.
Check out David’s shop , Japanese auto specialist, work is done right the first time! Highly recommended!
Recommended
KM

01/16/2021
Extremely well organized and professional approach to repair business
The organization and professionalism is apparent in how this business takes in new customers. I am now a customer and looking forward to commng here with my Toyota needs.
I can see now where the sea of great remarks comes from on thier internet page.
Ken
Recommended
LB

01/08/2021
Complete trust!
I have complete trust in Dave and his team - very knowledgeable and thorough job - very pleased!
Recommended

12/25/2020
A great place for car maintenance
Very knowledgeable about vehicle operation and maintenance. I have never had a problem with any of their work in the many years I have been a customer. Very competent in what they do.
Recommended
GA