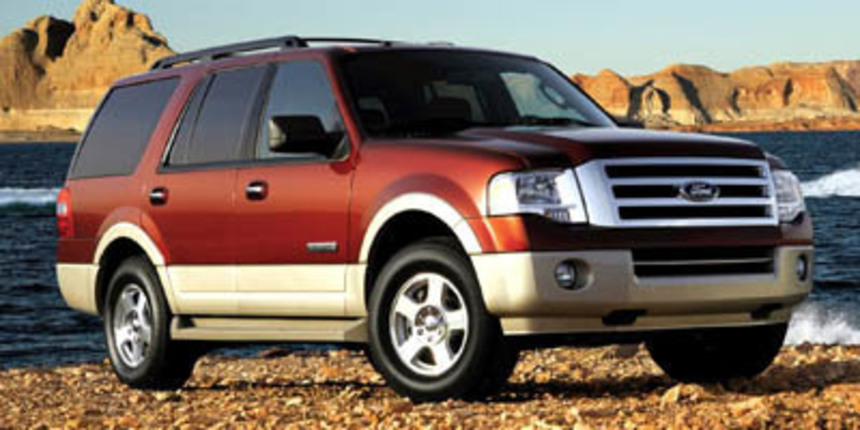 01/19/2019
Comfort, power, fun!
This is the first truck I ever owned. Comfortable, powerful, reliable. I feel safe on the road, especially during Chicago winters.
The car (2008) is an older model by now (2019) but the repairs so far were surprisingly few. Only downside is the fuel cost because the mileage is comparatively low. But it is a very fun ride.
Recommended
Pros
Power, reliability, fun.
Cons
Not a lot of miles per tank of gas.
JD
JERRY D.
2008 Ford Expedition

03/06/2018
Expedition EL - Review
We bought the vehicle at around 25,000 miles from a dealer and this 2008 Ford Expedition EL is equipped with motorized running boards, higher-end climate control features, etc., is a decent idea but flawed execution in many levels. The tailgates are prone to heavy corrosion, the running boards require constant attention after about 80,000 miles and the climate controls become problematic after about that same time. I have developed my own rebuild techniques (and sources) for replacement teflon bushings and other components for the running boards (versus paying Ford's extortion fee for replacement motor drive assemblies). The execution here on the motor drives is horrible - at best. The motor housings are painted aluminum and corrode heavily as they are right against the ground. The bearings are minimally lubricated with low-end grease, which gives way easily to the environmental circumstances. Once they fail, they are either stuck in the retracted or extended position. If you've ever seen one going down the road with the running board sticking out - that's why. I've already had to do the grounding mod to get the fan to run properly on the HVAC system. The passenger's side mirror is flaking out on its 'memory' element (tries to move past the stops). I've also had to replace both the driver and front passenger window regulators as they have steel cables and the cables rust and bust, dropping the window down inside the door. What a fantastic plan it is to put steel cables on drive assemblies inside a door where they're exposed to water..... what could possibly go wrong? Oh - and the transmission is sealed so the fluid can never be checked without dropping the pan. Did I also mention the radio failed, got VERY hot (ran the battery down), and unless you want to pay about $900 for a direct replacement unit, you're stuck going aftermarket with signal converters to make the steering wheel controls work? Then comes the little secret that the "power antenna" feed from the aftermarket radio has to be hooked-up because this isn't really a 'power antenna' - what it is, in fact, is the turn-on for the amplifier which is located near the passenger's door pillar, and without it you can't pick up a radio station of you were sitting on top of the antenna ~at~ the radio station. Then the fuel mileage kind of stinks too. Had I paid "new" price for the vehicle, I'd have to say my disappointment would run even a bit higher than it does. Other than that --- great vehicle.
Recommended
Pros
Roomy.
Cons
Window drives fail, mirror memory flaky, HVAC issues, running board drive issues, over-priced factory radio, tailgate corrosion issues, fuel mileage, lack of ability to check for basic fluid levels.
TS
Theresa S.
2008 Ford Expedition

10/06/2017
Love The Auto Shop and my SUV
I love this truck! It runs great, I feel safe, it is so comfortable and I have plenty of room for all the kids in carpool! My first car was a 1969 Ford Mustang, my second vehicle was a 1997 Ford F150 but I do believe I love my Expedition best of all!
Recommended
Pros
I feel safe and it is a reliable vehicle
IG
IVAN G.
2008 Ford Expedition

07/15/2016
This is my Big Body 2008 Ford Expedition
My Expedition is a great running truck I brought it certified pre owned and it's it's just been good to me I've had a second engine in it and it is just a good running truck. I would love to own a brand new one but they cost too much so that's that.
Recommended
Pros
It's a great truck
Cons
It need more trunk space for traveling.
GB
Glenda B.
2008 Ford Expedition

01/26/2016
It is a very nice vehicle and I've enjoyed it.
Have a lot of compliments on what men call a truck.
Recommended
Pros
Comfortable and can transport heavy things
Displaying all 7 reviews