807 2nd St.
On the Alley @ G Street
Encinitas, CA 92024-4409
(760) 436-3337
Send a message
www.furgersons.com
About Furgerson’s looks forward to exceeding your expectations. Furgerson's Garage is a AAA-approved, family-owned and operated state-of-the-art certified100%_SatisfactionAAA "green" garage in Encinitas, California that services nearly all models. Meeting the automotive repair needs of North County locals since 1981, Furgerson’s is known for its courteous and friendly staff, its ASE-certified master technicians, its wide variety of services, and its free local shuttle.

98% Would Recommend
Latest Review 3 days ago

Thanks for your response. You are right, we should have offered you something for your inconvenience. Please give me a call so we can talk about it. Im sorry that I was remiss and should have taken better care of you during your visit.

Thank you very much.

05/07/2019 Category: Service
Thomas said Justin, the service writer, attended to his issue and Thomas said Justin was fantastic in resolving the issue to his satisfaction.
Recommended
Original Review

05/07/2019 Category: Service
Thomas said this is the worst business ever for service. The service advisor and the writer lied to him and were very unprofessional. They said his vehicle would be done at a certain time and he sat for an additional 45 minutes when his vehicle was actually done. They tried to oversell him a part and he will never do business or recommend them ever for the reasons already stated. 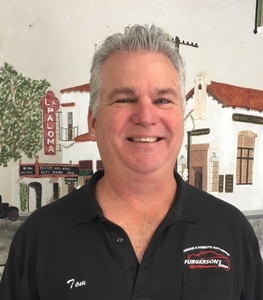 Thomas, Thank you for coming back. We are sorry that you were not completely satisfied and we hope that your experience was better and needs car's needs were met. Thanks again

07/02/2015
Clarification of smog problem
Thanks for your response. There are several points that I want to emphasize. I am not taking issue with the fact that my my car (20 years old, not 30 years old that you stated) failed the test. I agree that there was a legitimate problem with the smog check. My point is with your statement that you do your best to help a customer pass. The only thing that failed on the test was the smog intake hose (it had a huge tear in it which was clearly visible just by looking at it.) It was immediately clear that it would not pass. The car passed all the emissions even with the tear. Why did you even bother to test it when the visual inspection would fail the test? If you had pointed that out to me, I would have fixed it first and then have the emission test done. This is not "doing your best to help a vehicle pass." I am sticking to my assessment of the steep price for the part. Napa auto parts sold that genuine part to me for half the cost of what you were charging. The other garage installed it and didn't charge me. It took less than five minutes to insert it.
Original Review

07/02/2015
Smog test experience
Problem with smog test not handled well, estimate for repair way overpriced (I had repair done elsewhere for one third the cost), and didn't offer free retest even if I had repair done through them and was told that it would definitely pass on the second time.
Brad and C., President/Owner from Furgerson's Garage responded on 07/09/2015

Furgerson's Garage regrets that you feel disappointed in your smog check experience. It is unfortunate, but not uncommon for a 30 year old Camry to have a fault resulting in a emissions inspection failure. Furgerson's Garage has offered inexpensive Smog Check inspections for 32 years. With a 90%+ vehicle pass rate, we will always do our best to help a customers vehicle pass legally. Furgerson's has successfully smog checked several of this customers vehicles in the past with no issues, in our opinion this review seems like an unreasonable response to a legitimate failure. We obtained estimates from two other local STAR Smog Check certified AAA approved repair facilities for the same repairs we quoted, and our pricing was slightly lower than both of our competitors. Due to our discounted Smog Check pricing, we can not offer free re-inspections, nor are we required to by the State of California. Furgerson's Garage has built a reputation for the highest quality repairs using the best parts available at a competitive price since 1981. We look forward to meeting your expectations in the future.

06/22/2015
usually gotten good service
Picked up my car after hrs: 1) no key left in the glove compartment as I had asked, 2) no receipt of service performed, etc 3) parts replaced were not left in the vehicle as I had indicated on the envelope when I left the car before opening and 4) two large (.25 in dia) grease spots on the floor of drivers side.
Recommended
Brad and C., President/Owner from Furgerson's Garage responded on 06/25/2015

After it was brought to our attention that the customer left our business unhappy, our Service Manager contacted the customer to discuss the situation. We were unable to give the old parts back to the customer due to the fact that they had to be returned to the manufacturer or else the customer would be charged and additional CORE fee. Furgerson's Garage offered the customer a complimentary oil and filter service to make up for the miscommunication between customer and the shop.

04/22/2015
Should have fixed your prior work....
So i have 7 cars in the family that we take routinely to Furgeson's. Tom is great he knows us (and should by the volume of work we give the establishment). A little over 2 years ago we paid an awful price to have a window motor replaced in the tailgate of our Sequioa. This week we took the Sequioa in because the engine light, track off, and stability track light, came on in addition to the fact the window in the tailgate had stopped working again. So we paid to replace TWO sensors (unrelated but which happen to spontaneous trip the check engine light) in excess of $1,800. As for the window in the tailgate we were told it was again the motor which was over the warrantee period...even though we had paid you guys to replace it within the last three years. I said no to the guy when he told me it was going to be some crazy amount ($800 or $900) I can't remember. Tom then called back having heard the conversation and said he thought it a shame to just close it up without fixing and would split the cost with me for the window motor...some $550! This is for a motor and labor I paid for jus t2 years ago! And don't tell me it is the salt air by the beach! All of Japan is by salt water....And I bet the managers at Toyota would cringe to hear you say that.....which made my wife ask "where did Furgeson's get the old motor in the first place?...good question.....probably not Toyota or you would have made a stink to them on our behalf and got the thing corrected for free! I realize it was over the period you warranted the motor...but sometimes you step up and do what is right on behalf of your good customers. I would venture to guess that I am among your top retail cutomers (excluding commercial fleets). I would think you would go a bit out of your way to make right the work we already paid you to do.
Brad and C., President/Owner from Furgerson's Garage responded on 04/24/2015

Furgerson's Garage is committed to providing the highest quality repairs at a competitive price. We offer an industry leading 24 month/ 24,000 mile parts & labor warranty. Almost three years ago our ASE Certified Master Technician installed a new factory Toyota rear window motor to ensure a quality repair was accomplished. Unfortunately the factory Toyota rear window motor failed after our 24 month warranty expired. After discussing the matter further with our very loyal customer, Furgerson's Garage replaced the rear window motor under a customer satisfaction warranty at no charge. The Check engine light, Traction off, and Vehicle Skid Control lamps were caused by two unrelated items: a bank 1 oxygen sensor heater element failure (the bank 2 oxygen sensor was replaced three years ago at our facility, which is still functioning normally) & a brake power booster stroke sensor (which requires the entire brake power booster unit to be replaced). Both parts were replaced with original equipment parts,  which fixed all three warning lamps illuminated. At Furgerson's Garage we employ ASE Certified Master Technicians with the most experience in the county who strive to perform exceptionally, and install only the best quality replacement parts available. Customer satisfaction is our highest priority and we look forward to continuing our business relationship with this customer.

11/27/2020 Category: Service
Richard said they were able to set up an appointment and did the service very fast.
Recommended
LP

11/25/2020
Squeezed me in!
Two days before Thanksgiving and my power steering went out...even tho they were booked solid and said my best hope would be three days...I said, Do the best you can, it's my only car.....1 1/2 days later I got my car and am most grateful to Ferguson's for coming thru again!
Recommended
NC

11/18/2020
Quick
Pleasant,accommodating an gets the job done!
Recommended
Brad and C., President/Owner from Furgerson's Garage responded on 11/20/2020

Thank you for the 5-star review! We appreciate it.

11/16/2020
Great service!!
The guys at Furgersons service all of my family vehicles. It’s a one stop shop for almost everything automotive.
Recommended
Brad and C., President/Owner from Furgerson's Garage responded on 11/20/2020

Thank you for the positive review!

11/14/2020 Category: Service
Richard said it was good service. He had a little dispute over some of the pricing. They did a good job.
Recommended
Brad and C., President/Owner from Furgerson's Garage responded on 11/20/2020

Thank you for your positive feedback!

11/06/2020
Always excellent service
I am never disappointed when I bring my car to Furgerson’s. I am never over sold and I appreciate the advice about what my car needs.
Recommended
Brad and C., President/Owner from Furgerson's Garage responded on 11/13/2020

Thank you Sophia for the 5-star review! It's always a pleasure helping you when you come into the shop.

10/28/2020
Efficient
They are friendly, efficient and honest. Highly recommend them.
Recommended
Brad and C., President/Owner from Furgerson's Garage responded on 11/13/2020

Thank you for your review. We appreciate the positive feedback!

Randy B.
Cardiff By The Sea, CA
Ford Crown Victoria

Thank you for the positive review! We really appreciate it.

10/25/2020
easy peasy as always!
Ferguson's never disappoints. Friendly, fast service over the phone and at check in... and car is always ready before the time estimate given. Thank you Fergusons!
Recommended
Brad and C., President/Owner from Furgerson's Garage responded on 11/13/2020

Thank you Kristie for the 5-star review!

10/23/2020
Character makes a difference.
I took my 1998 pickup truck in for a trip check. It has been parked near the beach for 17 years thereby subject to the moist salt air. Later in the day I received a call at which time they said we don't recommend driving this pickup any long distance as it is badly rusted and to bring it up to a fair condition would cost more than it is worth. This was news I didn't want to hear but I really appreciated the honest opinion. You can be sure I will continue to take my other vehicles to their shop!
Recommended
Brad and C., President/Owner from Furgerson's Garage responded on 11/13/2020

Thank you for the positive feedback! Its always a pleasure helping you when you come into the shop.