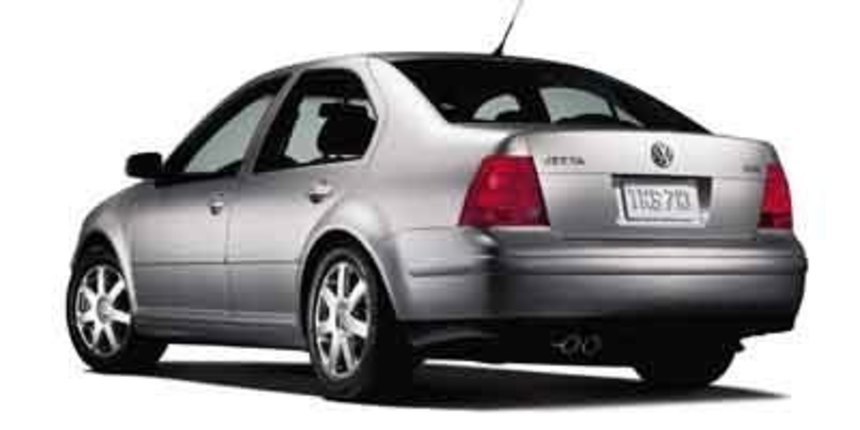 07/30/2020
Great for first car
Its a good car just make sure its in good condition before you buy it. Alot of teenagers destroy these vehicles, quick fix them cheap, and re sell them for more than what their worth. As long as the cars not a lemon when you buy it and you maintain it well it should treat you great!
Recommended
Pros
Great sound
Quick
Comfortable
Cheap to maintain
Cons
Every teenager destroys these cars
SJ

07/08/2020
Great driving small car.
I bought this car second hand. I was very lucky. Actually, I think my son bought the car at an auction.It was in excellent condition, inside and outside. light silver finish, exterior,medium gray interior.
Recommended
MJ

03/06/2019
My Precious O3 VW Jetta
My 03 Jetta is my precious baby. She was non-operational for over (2)years but Edgar and Comtires have brought her back to life. I expected major repairs for a car that is 16 years old but she had just normal wear and tear without engine nor transmission issues. I was relieved for lower cost repairs after 13 years as the owner of the car.
Recommended
Pros
Love the body styling of the 2003 VW better than any other year for the same car. Love the car and the visibility through the windshield.
Cons
Electrical issues and recall of catalytic converter. They could have done a much better cup holder for the car, it is very unsteady and cheaply made. The center console door is also flimsy, it broke awhile ago and it's a shame that it costs $150.00 to replace. The gas mileage is surprisingly bad even after repairs and flushes, I expected better gas mileage and better speed from the car...People always think that its very fast but it's average. Overall, I love, love love my car, that's why I've had it for 13 years and plan to keep it forever.
OB

02/13/2018
VW jetta
This is a great car. I don’t care what anyone has to say about be jettas. Every single car my have their issues but I trust this car, it is a solid build and reliable. If you take care of your car it will last you.
Recommended
RC

09/20/2017
Used Jetta, don't buy from a Friend
Thought it was a mutual supporting win-win, but so far nearly everything that could go wrong has on this used car. Guess a decade plus old car has some things that will begin to wear or need replacement, however wondering if VW Jetta has taken Ford Escort reverse engineering of wear out timing into their design.
Fun car, good on gas mileage and intended for starter car for our new driver in the house. Unfortunately, been more in the shop and more in repair$ than original buying price. Could just be bad luck on my part, and not angry with the friend... but it is one thing after another - more than any other used vehicle I'd had... ever!
Recommended
Pros
Slick little car; good on gas mileage, nice 'starter' vehicle for new driver
Cons
Things seeming to come 'apart' all at once. Brakes locked up in back, cooling system leak, clutch replaced. Probably could have got a better deal on another selection, but now committed and need to get my investment's worth out of this thing!
Interior starting to come apart - roof upholstery and seats wearing out.
DH

07/17/2017
Enjoy driving my 2003 VW Jetta...5 speed at that :-)
Have only owned VW's...my dear Dad taught me to drive standard car, my sisters yellow bug...I eventually bought that care....have driven standard shift all my life....will continue to drive the 5speed VW Jetta until parts are available or gets too pricey to fix/run
Recommended
Pros
Reliability, good gas milage....
Cons
none that I can think of
BB

04/16/2017
Driving a 2003 5 speed VW Jetta
Have only owned VW, starting with a yellow bug....Dad taught all 4 of us kids to drive a shift...thus...I've never owned a automatic...shifting is effortless ...I am truly a Volkswagen driver...Delta keeps my aging Jetta in GREAT driving condition...
Recommended
Pros
5 speed, front wheel drive, excellent gas mileage...
Cons
some may consider a 5 speed a con....I HAVE ALWAYS HAD A SHIFT VW... interior, nothing fancy...do not need all those fancy gadgets in order to have a ENJOYABLE RIDE!
JS

02/06/2017
2003 VW Jetta GL
Best little car I ever bought. 145K and just turned 14 years old and almost everything is original without breakdown!
Recommended
Pros
reliability overall
Cons
not being able to turn off daytime running lights; the automatic door locking once car gets above 5 MPH; key fob not unlocking ALL doors in one click
CH

09/16/2016
This is my first Volkswagen
Although I am the third owner and have enjoyed driving 74,000 miles in a car I plan to be the last owner. Very reliable, handles well, nice sound system, comfortable seats. It is a 5 speed wagon, a diesel, and I really enjoy the 50 mpg it gets. This Jetta is the GLS with all the whistles and bells so having my first car with heated seats while living in Alaska is a real treat. Heated mirrors, a very thorough owners manual, sunroof never leaks. That is crucial where I live with a yearly average of 150" of rain.
My grumble is the car is so low I scrape the front bumper cover and have had it tear off a couple of times. The other minor beef is the engine is so low the oil pan is very vulnerable. Just a heads up warning, I live in Alaska and have cracked one. These slights would not stop me from buying another Jetta. At 112,000 miles it is still running on the original clutch, on its second set of tires, changed one set of glow plugs. This Jetta diesel will keep going after I cannot drive anymore.
Recommended
Pros
Good handling, great gas mileage, reliable, longevity, nice interior, good engine access for general maintenance, good power for a diesel, easy access to the fuel tank and pump, a full size spare tire, nice stereo options and sound, six air bags, low interior noise.
Cons
Some maintenance requires special tools, oil pan and front bumper are vulnerable to damage, some parts to be worked on or replaced are over designed, the car jack seems precarious, rear passenger head rests block rear-view mirror vision.
EC

06/01/2016
Too expensive
This car it's like a woman, needs lot of money to be maintain.
Recommended
Pros
Small car, gas saving.
Cons
When need to fix a part, too expensive.
RW

01/24/2016
Great car
I bought this car off my sister because she got a bigger family van and there were a few maintenance issue with the car. It was very easy and turned out quite fun and gratifying to be able to diagnose the issues and fix them myself
Then to see that the check engine light went off that was the best. I use this car for work and taking my family places and it is fantastic.
Recommended
Pros
Roomie, nice body style, easy to maintain
Cons
Slow on initial take off
MM

06/15/2015
2003 VW Jetta TDI Sportwagen
A high mpg cargo hauler if you're willing to live with its quirks and maintenance.
Recommended
Pros
Impressive fuel economy with the Diesel. Excellent driving character. Tight turning circle. The mileage I get surpasses what I got in my 99 Corolla, and yet it is a larger vehicle that can carry much more cargo. Despite my very long list of Cons I choose to keep the vehicle, because at the time there was nothing like this Jetta wagon that can haul this much junk and still get mid to high 30's and push 40's on the open roads. Today however, with the small SUV's and "ecoboost" gas engines the diesel "advantage" is slowly fading.
Cons
Engine: Though strong and reasonably dependable, some have said the 1.9 TDI (despite its intercooled turbo) is a little slow off the line with an automatic. The Turbo's performance kicks in if you want to pass someone and rocket from 55 to 80 mph it does pretty well, but at slower speeds where you don't get as much turbo boost it's a bit lethargic. Pushing this "old school" diesel hard, like an old dump truck, will cause a diesel exhaust plume, the guy behind you may back off not due to your speed, but due to the exhaust smoke. Howes or DieselKleen helps reduce the smoking.

Transmission: This Jetta has the troubleprone 01M automatic transmission. VW specs these as "lifetime fluid" with no fluid changes needed. This is far from the truth, if you buy a used high mile Jetta with the 01M transmission get one low miles or one verified with the previous owner that the transmission fluid was serviced.

Chassis: As I previously reviewed with Dallas Frame and Alignment, this generation of VW (called MK4) have weak rear axles that are prone to bending when the going gets rough. In my case cobblestone ice at high speed (before Texas started salting roads) bent both sides of my rear axle).

The vehicle body itself seems solid, watch out for the steel edges of the door, more than once I've bumped my head on the corner edge. Because the molding is on the frame of the car and not on the door this poses a considerable risk. Note that later models of Jettas this design was changed with the rubber molding on the doors.

While you save money on the MPGs (despite higher diesel fuel prices) diesels can't miss their maintenance. Oil changes cost more (it takes more expensive diesel class oil), plus it has a timing belt/water pump change interval - initially around 60k, most TDI mechanics will install the 100,000 kit. Batteries are much larger (due to the high compression of a Diesel) and cost a bit more. It can be difficult finding a good, trusted TDI mechanic.

Interior: Plastics, especially black plastics, tend to peel it's clear cover and show scratches and look generally nasty and give the vehicle's interior an extremely worn out look. While the in fashion "thing" I refuse to buy another car with a black interior.
Displaying all 17 reviews