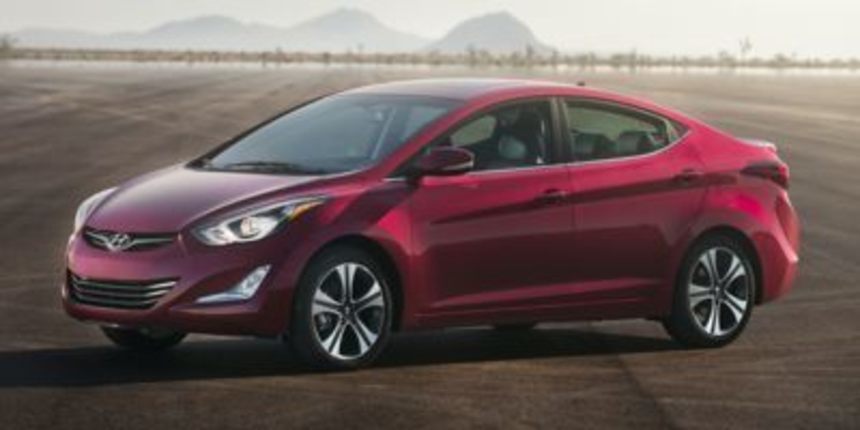 09/05/2015
Manufacture defect from the Hyundai Alabama plant...
Just two weeks after purchasing a new 2016 Elantra 4 door Value Edition (5 miles on the odometer) a constant creaking sound is being emitted from the rear of the vehicle anytime the chassis bends (for example driving in/out of parking lots). I was advised that the frame was improperly manufactured. I've been driving a loaner vehicle for over a week. To date, dealership has been unable to repair the vehicle.
Recommended
Cons
Frame manufactured improperly causing constant creaking sounds.
AW

11/17/2015
How do I love my car?
Just love the car as it is - the only thing I would change is the roof so not as much rain water comes in the windows. When it rains I am forever wiping down my driver's door.
Recommended
AR

01/26/2016
I love it!!
I love the way this car handles and looks.
Recommended
Pros
Price, feel of the drive, appearance
JA

08/05/2017
Junk
Junk in every way other than body design. Drives terrible, handles awful, no road stability, and watch out for overweight passengers will send you careening off the road. Thx Hyundai.
Recommended
Pros
None
Cons
The entire vehicle
KA

01/23/2018
2016 Hyundai Elantra
I will never purchase another hyundai ever, my car gives me so many problems and it is only two years old. I can hear when I am accelerating and I had to get a new transmission when my car was a year old. Hyundai Elantra base car don’t even have Bluetooth. This car is highly overrated
Recommended
Pros
Good on gas
Cons
Expensive , no back up camera, no safety features
BC

01/26/2018
No Spare, No donut
The front ends are low so pay attention when pulling up to a curb. Lots of road noise. Body work expensive. Tires lasted less than 35,000 miles. At the age of 61, that's the first time I had tires to wear out so soon on a new vehicle. Head rest uncomfortable, but like many other cars. Shocked that I didn't even get a donut for a spare tire; I had no idea. Just a can of fix-it stuff and an air compressor. It does drive good. Perfect for getting around town. Gas mileage good. Like that the back seats flip down for larger longer cargo. Back seats easy to flip down. Looks stylish. Roomy trunk. A/C smells when you first turn it on - new cabin air filter does not help.
Recommended
JB

07/03/2018
Review of my 2015 Elantra
Over the years, we have bought several Hyundai cars from this dealership as they treated us well, and the cars were very reliable. Not so, with our 2015 Elantra, that we bought new from the Dealership. Our 2015 Elantra is still is not reliable when the gas peddle is applied. The car may, or may not respond to the gas peddle on a random basis. As such, there have been a few close calls, with traffic coming fast right at us, and the car does not move when the gas peddle is pressed. The dealership has tried several times to fix the problem, and yet it still exists, exactly the same as when we first reported the matter. I am always told, 'the service staff is unable to duplicate the problem.' I reiterate, it happens RANDOMLY, and we are never sure when it will happen. The car is a death trap, just waiting to be hit by another vehicle, because that 2105 Elantra, might not be able to move out of the way to avoid the crash. I guess no one at the at dealership cares enough to take the needed time to find the root cause and fix it. Shortly after we bought the car, we left it at the dealership for more than two weeks, so it could be fixed properly. When we picked it up, we were told that the service department could not find any problems at all. On driving home, the car failed two times!!! Based on this matter, I have to give the dealership service a very poor review. I take this matter very seriously, as it involves our safety, and the safety of others. Yet the Dealership hides under the desk, with the standard answer, "could not duplicate the problem'.
Recommended
Pros
nice paint job.
Cons
Where is the light for the glove box??? Car is noisy, especially when windy.
Car comes without a jack or spare tire. Go fix a blowout with a can of compressed air!!!! The console latch snapped off, made of inexpensive plastic. The rear view camera display is useless in the sun. I have to keep a piece of cardboard in the dvd slot to create needed shade in order to see the screen, especially for the radio displays. Tires needed replacement at 20,000 miles. Gas milage 25 city / 30 highway, not all that spectacular these days. The driver seats is uncomfortable on long drives. Could use better back support. The car does not always respond to the gas peddle, creating a major safety issue, and the dealership claims they are unable to duplicate the problem. Seems to be a bumpy ride over rough roads.
BT

08/07/2018
My Hyundai
We do Like the looks, do not like the performance. Have already had to have battery , blower motor and back up camera replaced, still having an issue with tire wear and instability at highway speeds.
Recommended
Pros
It’s roomy and comfortable
Cons
Too many technical issues

08/10/2018
Trunk often open in the night; window is too small; parts cost and insurance premium are much higher
I bought my Elantra two years ago. The car itself is not bad. But the engine power seems weak. When I accelerate, the noise is loud.
The car window is small, the field of vision is not wide enough. However, these are all tolerable.
One thing makes me very uncomfortable is, I park my car on the street, when I put the key in my pocket, I found many times the trunk was opened in the morning, luckily I don't have valuables in the trunk. The key is also too big. It needs improvement.
My battery died after 36100 miles; the warranty expires after 36000 miles. I found the Hyundai battery is so expensive. My previous car battery costed me about $75; but Hyundai battery costs more than $200. In addition, I can not jump start the battery with my jump starter. I had to tow the car to the dealer. Luckily the tow is still covered. But next time, after another 36000 miles, it will not be covered any more. Can you imagine you need to spend $400+ just to change a battery? The battery is also much harder to replace comparing to my previous car.
******** Consider it carefully before you buy a Hyundai car. ********
Recommended
Pros
Price is low
Cons
Key needs big improvement
Parts are very expensive; hence insurance premium is much higher
Engine power is not strong enough

08/18/2018
Bad Car
I think this is a recall car I had at lot of problems in this car it's slow I almost got in three accidents because it's not accelerating right this car has just made me more stressed because of the problems still paying for a car and have to pay to get it fixed really disappointed.
Recommended
Pros
bad car
Cons
bad car

12/02/2018
Works for a bit
The car works well for a bit but after 50,000 miles issues start to arise quick. Engine light, stalling, acceleration lose, tire issues. Lot of issues that they will not tell u is wrong since they want to get to 60,000 miles where your warranty expires. Go for a mazda or some other brand.
Recommended
Pros
Cute
Cons
Unreliable
Alot of mechanical issues
SS

12/08/2018
My car should sound better!
I have a 2016 Hyundai Elantra, and when I crank it in the morning there is a loud flapping sound under the hood. I have taken it to a Hyundai dealership several times and was told it is the sound of the part getting warmed up. Other brands of cars don't make this sound. If this is common, Hyundai need to make better improvements. At this point, I do not see myself buying another Hyundai.
Recommended
Pros
My car looks very nice on the outside.
Cons
My engine is loud in the morning, which I was told is normal
DS